Favorite Recordings Of... Bach: Mass in B Minor (3, Voting)

- Poll for the Mass closes in 3 days, get your votes in if you haven't already
- Current results for the poll have been tallied in the spreadsheet
- Nominations round for Beethoven's 5th Symphony will begin in 1 day

Polling round for the 5th Symphony will start soon!

Chopin, Beethoven, Prokofiev
Joined 6 mo ago
·
163 Posts
Reminder: Polling for the 5th Symphony ends in 2 days, and nominations for Brahms Symphony No. 4 will begin soon.

Joined 11 mo ago
·
324 Posts
I have a question. Most respectfully, how and where are the votes tallied. I see 52 votes for the top vote getters for LvB 5 but I don't see how the votes were taken and who voted.

FrankinUsa said:
I have a question. Most respectfully, how and where are the votes tallied. I see 52 votes for the top vote getters for LvB 5 but I don't see how the votes were taken and who voted.
Click to expand...

Take a look at the voting thread. It is in the Games/Polls subforum. I believe voting in the LvB 5th poll, the polling was public. Polling on some of the earlier selections was not.

Chopin, Beethoven, Prokofiev
Joined 6 mo ago
·
163 Posts
I would like to bring attention to the fact that with the new forum software, it seems as though we can have unlimited poll choices. The nominations round was instituted partly because of the fact that we were limited to 15 choices on the voting round.

With the new system, it is possible to be able to vote for all nominations. What are your ideas?

Chopin, Beethoven, Prokofiev
Joined 6 mo ago
·
163 Posts
In the future, we will set a time frame of 7 days for nominations - then vote on all of the nominations in the following round.

Chopin, Beethoven, Prokofiev
Joined 6 mo ago
·
163 Posts
Poll for the Mahler: Symphony No. 2:

We have nominated 33 recordings, however it has come to my attention that there is an unstated limit of 25 choices - for now we will only vote on the ones nominated twice and those first nominated. It is possible to split it up into several rounds to vote, however. Discussion below is... 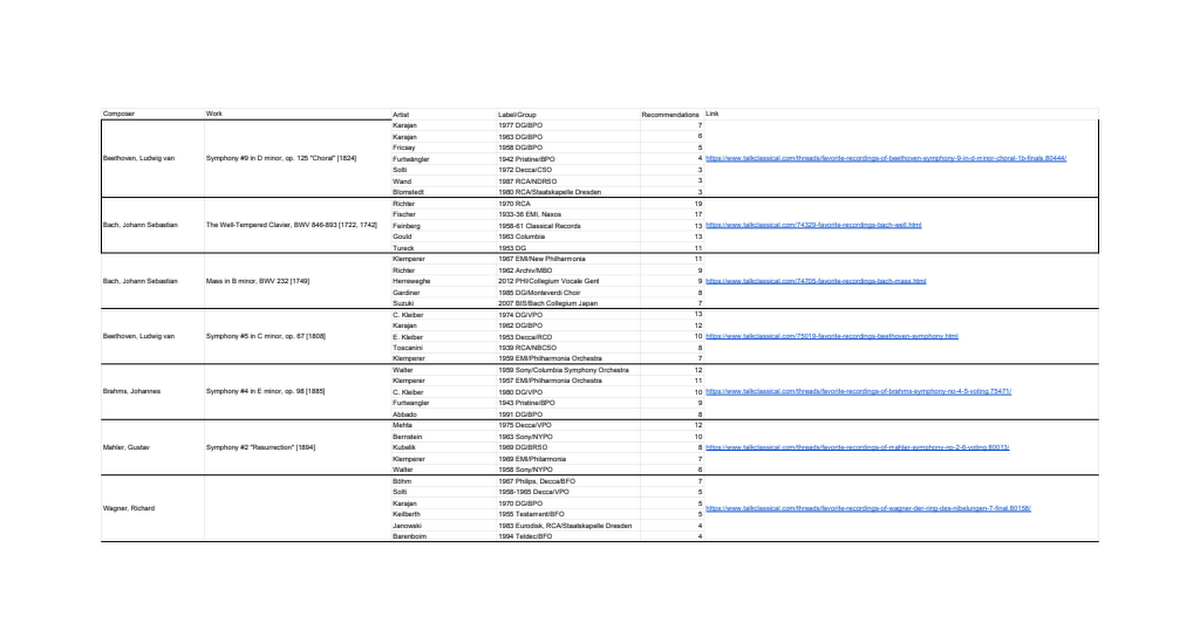 Chopin, Beethoven, Prokofiev
Joined 6 mo ago
·
163 Posts
Since there is an unstated limit of 25 poll choices, it is possible that I will split the nominations between two rounds, and a final round for the top of each round.

Chopin, Beethoven, Prokofiev
Joined 6 mo ago
·
163 Posts
Because of the new forum software, new possibilities in voting, and other factors, I have decided to change the structure of the procedure for nominating/voting recordings.

It is very possible that in the future, there will no longer be enough "seconded" recordings to satisfy 15. Therefore, going forward, we will vote on every single nomination. Of course, with such a system, there will be problems that need to be addressed: (1) limits on nominations, (2) rounds of polling, and (3) how the top recording is decided. I will address each of these below.

First, limits on nominations. The trial run of using every nomination has been partially successful for the Mahler 2nd Symphony, but there are lessons to be learned. Thus, in the future, the nominations round will time out after 7 days OR 1 day of inactivity, whichever comes first. This is to prevent the nominations from dwindling down to 0 by the last 4 days. By inactivity I mean no new nomination being made in the thread. Furthermore, we will keep the 1 post, 5 nominations per post rule as before.

Second, rounds of polling. With this new system, we will exceed the amount of choices that we can have in a poll. I didn't know this before, but it seems as if the system automatically stops giving you more options after 25 poll choices. This means that I will have to divide up the polls into separate groups - if I have 48 nominations for example, I will divide them up into 2 groups of 24 poll choices each. These will go on simultaneously, with the poll time limit set to 3 days.

Finally, since we have multiple rounds of polling, we need to narrow our selections down to the top 5, 6, or 7 (if there are ties) with a final round. I will take 24 poll choices, split evenly between each group. Note that 24 = 2 * 3 * 4, which means that we can evenly divide it if we have 2, 3, or 4 groups. Also note that if nominations are enough for only 1 group, we will not have a final round.

I will be test-running this new system for the next few pieces on the list. I welcome any and all feedback, so we can better improve it! I am also contemplating whether or not to split Wagner's Ring cycle up into its 4 constituent parts, or leave it as one (I am currently favoring the latter, but feel free to express your opinions here). The nominations round for it will be up soon!
101 - 120 of 145 Posts
Join the discussion
Continue with Facebook
Continue with Google
or sign up with email
About this Discussion
144 Replies
21 Participants
Last post:
lnjng 10 d ago
Classical Music Forum
A forum community dedicated to classical music musicians and enthusiasts. Come join the discussion about arrangements, collections, techniques, instruments, styles, reviews, classifieds, and more!
Full Forum Listing
Explore Our Forums
Classical Music Discussion Off Topic Pub Classical Music Discussion Polls Opera Non-Classical Music
Recommended Communities