Joined Mar 5, 2016
·
11,507 Posts
This is my favourite Shostakovich symphony but is, I know, one that many of the more committed Shostakovich listeners here tend to dismiss. I do greatly like some of the others - 5 and 10 especially and also the flawed 6 - but not so heartily as 14. Any other 14 lovers here? Or, for those who are less enamoured, why? What's wrong with it? Also, I wonder if anyone has knowledge about where it came from - why did Shostakovich suddenly go in such a different direction, for example? Was it the influence of his friend Britten?

As for performances, I have heard a great many but none seem to come close to the Rostropovich with Reshetin and Vishnevskaya (both singing really beautifully). Currentzis gives us a different take (neoclassical?) that I also enjoy.

Art Rock said:
One of his best - and I regard Shosty as one of the greatest symphonists of all time. 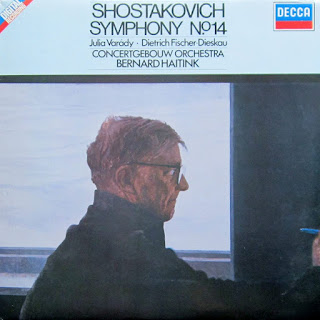 It is a work for soprano, bass and a small string orchestra with percussion, consisting of eleven linked settings of poems by four authors. Most of the poems deal with the theme of death, particularly that of unjust or early death. The composer himself was initially unsure what to call the work, eventually designating it a symphony rather than a song cycle to emphasise the unity of the work musically and philosophically: most of the poems deal with the subject of mortality. I have a number of versions, but I'm always going back to the first one I heard, which has the added bonus that the poems are all sung in their original language. That version is by the Concertgebouw Orchestra under Bernard Haitink, with Julia Varady and Dietrich Fischer-Dieskau, on a Decca CD.
Click to expand...

Yes indeed: the Haitink is a good one and I get the interesting idea of singing in the language of the original poetry. But the work is a Russian one so Haitink's recording can't "compete"! But it is good (I find "At The Sante Jail" particularly impressive) and Fischer-Dieskau is compelling. I think the down side of the language choice is more evident with Varady ... which may mean she sings more clearly?

Perhaps I am wrong but I have seen many "my favourite Shostakovich symphonies" threads and posts where 14 gets short shrift from a majority.
1 - 3 of 3 Posts
Join the discussion
Continue with Facebook
Continue with Google
or sign up with email
About this Discussion
14 Replies
9 Participants
Last post:
SONNET CLV 3 mo ago
Classical Music Forum
A forum community dedicated to classical music musicians and enthusiasts. Come join the discussion about arrangements, collections, techniques, instruments, styles, reviews, classifieds, and more!
Full Forum Listing
Explore Our Forums
Classical Music Discussion Classical Music Discussion Polls Off Topic Pub Opera Non-Classical Music
Recommended Communities