Shaughnessy said:
I'll be that guy...

I'll have to play around with the chronology somewhat but I'll try to put these threads in perspective...

The thread starter is EOHutchinson - Earl Ofari Hutchinson - He's been a member since May 10, 2015 - He's created 7 posts in 7 years - 6 of those posts are threads that he started to publicize his latest book.

On April 30th of this year he created a thread entitled - "How to Make Classical Music Appealing to Young People" to promote his book - "A Young Person's Guide to Classical Music".
This thread is 11 pages long and has 202 (and counting) posts.

A word on the book itself - It's published by "Middle Passage Press" which is a vanity press company owned by the author - Earl Ofari Hutchinson - It's not a release issued by a legitimate established publishing company.
"Middle Passage Books" has only one author on its roster - Earl Ofari Hutchinson - who has written over 20 self-published books on a variety of subjects.

On May 10th of this year he created a thread entitled - "Why do so many young persons hate classical music" to once again promote his book "A Young Person's Guide to Classical Music"
This thread is two pages long and has 38 (and counting) posts.

On October 9, 2016 - almost six years ago, EOHutchinson created a thread entitled ' Name you favorite African-American Composers" to promote his book "Our Music Too The Black Experience in Classical Music"

On October 11, 2016, two days later, EOHutchinson created a thread entitled "World's First Black Composers and Artists Classical Music Station Launched" - It's not as cut and dried as the other threads but I'm going to go out on a limb here and guess that one of the subjects discussed on this long-deceased classical music station was Earl's book "Our Music Too The Black Experience in Classical Music"

Again, that's 7 threads in 7 years and 6 (and possibly the 7th) were created to publicize books that he's written which have been published by the vanity press imprint that he owns.

This is the link to the listing on Amazon - Remember, the book is entitled - "A Young Person's Guide to Classical Music" - 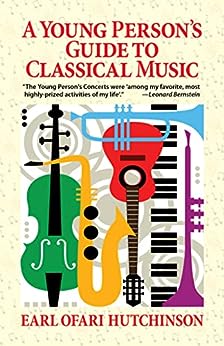 Click on the cover of the book so that you can see a reproduction of the title page - Right underneath the title is a quote from Leonard Bernstein which reads - "The Young Person's Concerts were among my favorite, most highly prized activities of my life" - If one didn't know better, one would think that this was a reviewer's blurb that Bernstein provided for the book itself. This is disingenuous at best and dishonest at worst. An unsuspecting parent - not well versed in music or publishing practices but knowing the importance of the name "Leonard Bernstein" - could conceivably make this purchase in the misguided impression that Bernstein actually read it and approved of the content.

He claims to have a Ph.D in sociology from Pacific Western University - Here are a couple of quotes from the Wikipedia article -

"Pacific Western University (Hawaii) was an unaccredited university closed in May 2006 following a lawsuit filed by the State of Hawaii a year earlier."

"Pacific Western University (Hawaii) and the affiliated Pacific Western University (Louisiana) were not accredited by any accreditation body recognized by the United States Department of Education. As such, its degrees and credits might not be acceptable to employers or other institutions, and use of PWU (Hawaii) and PWU (Louisiana) degree titles may be restricted or illegal in some jurisdictions."

A Ph.D from an "unaccredited" university that is not recognized as an accredited body by the USDE is essentially the most expensive lavatory paper in existence.

There are at least a dozen Ph.D's on this forum in fields ranging from music theory to musicology to biochemistry to chemistry to economics and we'll all tell you the same thing - It's the hardest *** thing you'll ever do in your life that doesn't involve people actually shooting live rounds of ammunition at you. If you didn't earn the title the hard way - by attending an accredited university - by writing a dissertation and then successfully defending it - you don't have the right to use the title.

And so... now you've heard from that guy... and the rest is up to you, the readers and writers of the posts within this thread.

In about two weeks, Earl is going to show up again and create a thread entitled - "Why do so few young people love classical music" - and I'm not entirely certain that there's more than two - maybe three - people who will even notice.

I was that guy this time... next time, it'll need to be someone else wiling to play the role...
Click to expand...

As I said in the other thread, this book is a scam. Boring title-- "A Young Person's Guide to X." Marketing to people hoping this book would magically save the CM industry, not to children. And finally, why would he write a book ostensibly about getting kids into CM and then ask if children hate classical music? Imagine what message that sends to the people he's marketing to (TC posters and lurkers). To me, it signifies "I have no clue about what children think of classical music. I wrote the book hoping to make money."
O

Simon Moon said:
That is all pretty unfortunate.

I have heard Earl Ofari Hutchinson speak on the radio a couple of years back, and he seemed like a pretty smart guy, with some interesting ideas.

He has just slipped quite a few steps lower in my estimation.
Click to expand...

He can be a smart guy with some interesting ideas, and a disingenious marketer. The options are not mutually exclusive. He might have even written decent guides on CM. I'll never know, because I am not even getting his books on Kindle Unlimited, much less purchasing them.
O

Shaughnessy said:
He's not a bad guy, I really don't want you to think of him that way - Based on the subjects that he's written about in his books, his heart and mind are in the right place - I tried my best to be as fair to him as I could be - The lure of the honors - the respect - to be found in academia can overwhelm even the most noble and heroic of souls - He may honestly feel that he's done the work to merit the honor - that he's had to overcome adversities that others haven't and that he found a path which would lead him to his desired destination and instead found himself lost and without a way to find his way back.

Some people embellish their academic credentials - Some their military combat experiences - Some the number of times that it took to solve today's Wordle.
The desire for self-esteem and to be esteemed by others - to be respected - can lead one to make regrettable decisions. I would not have done what he did but I also did not lead the life that he did.

I didn't want to be judgemental - and when I re-read my post I realized that it could have used more empathy and less vitriol and thus I've edited to take some of the edge off.

And to put everything in perspective - He's creating threads on the forum as a way to sell his books - He's a free-lance writer trying to make a living - He would have been better off by being upfront about the intent of the threads. All he needed to do was write - "I just wrote a book, I would be interested in sharing some ideas with you" and he could have lead a guided discussion on these topics.
Click to expand...

In the other thread, I first tried to politely explain that the marketing for Hutchinson's book is ridiculous. I didn't want to trash the author, and hesitated at even posting the constructive criticism*. When Hutchinson didn't participate in the thread discussion, I lost my generosity. Then I looked him up on Amazon, and found I would probably like his ideas...but I wasn't going to reward what Hutchinson did here by buying one of his other books.

*The book might well have content kids already interested in CM would like, if the cover and description are redone. But now part of me wonders if it's largely a copy-paste of Beethoven & Me (his general guide to CM) because of his behavior here (and apparent lack of knowledge on what kids like/think).
O

Chibi Ubu said:
I found this one on YouTube, which is a 2010 visual presentation of Beethoven's Große Fuge, opus 133. This may be a better way of presenting classical music to a video game generation, at least I think it is!
And a tip of the hat to the current 1800s composition poll here at TC that I just joined.
Click to expand...

I loved the Grosse Fuge immediately because I heard it as an emotional journey from violent conflict to peaceful cooperation. Not as a contrapuntal exercise.

That approach would make the Grosse Fuge in particular more popular, regardless of the format it's presented in.

I wonder if I would have loved it immediately when I was younger and hadn't listened to a lot of CM yet. I think I would have been hooked, but I don't know.
O

Open Book said:
How can they have no experience of it when it appears in ads, movies, and TV every so often? Even that little bit of exposure was enough to reel me in when I was their age.
Click to expand...

But pop culture uses brief sound clips of pieces. It's another thing to listen to even two minutes of a CM piece.
O

Open Book said:
I disagree with this. Just the sound of classical music was so different so beautiful to me that it was arresting. I didn't need to hear an entire work to know I wanted to hear more of this kind of music. I think if it's in you to like it, it won't take much to get you to pursue it.
Click to expand...

Most people don't respond that way to CM, and kids have short attention spans.
O

rcarle67 said:
The word hate is used so much these days it has lost its meaning. Have "most young children" ever loved classical music, Really? I doubt it. I think we have to admit that it is something most folks simply won't listen to when "popular" music, with a basic, danceable beat, is everywhere. To appreciate a Beethoven quartet takes an acquired taste.
Click to expand...

While the last sentence is generally true, I think any CM listener would enjoy the fifth movement of Beethoven's Op 131.
O

murphmeister said:
Back in the early 70's I was like young adult listening to popular music, but my tastes were classical. Then, I outgrew that music and adverted to my classical training on the clarinet. I went on a two-year binge to immerse myself in classics in both music and literature. I can still recall when I first listened to the first measures of Beethoven's Eroica Symphony. I must have been as gape-jawed as were those who first heard it.

In America, we don't teach classical music which is so more abundantly varied in scope and quality. I have long said Americans do not have good taste. What other country would praise Rap which is neither music nor poetry nor good.
Click to expand...

I think rap takes more effort than some popular songs, at least.
O

clachat said:
The title of the thread is a bit like tabloid.

"Why do so many young persons hate classical music"

Then proceeds to ask " Is it true young people hate classical music??? ". So the original question is not based on an actual premise.